REVIEW: Every Other Day by Jennifer Lynn Barnes 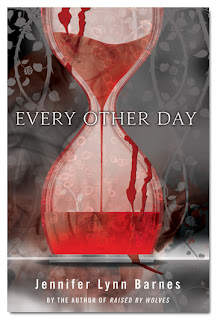 And then every day in between...She's something else entirely.

Though she still looks like herself, every twenty-four hours predatory instincts take over and Kali becomes a feared demon-hunter with the undeniable urge to hunt, trap, and kill zombies, hellhounds, and other supernatural creatures. Kali has no idea why she is the way she is, but she gives in to instinct anyway. Even though the government considers it environmental terrorism.

When Kali notices a mark on the lower back of a popular girl at school, she knows instantly that the girl is marked for death by one of these creatures. Kali has twenty-four hours to save her and, unfortunately, she'll have to do it as a human. With the help of a few new friends, Kali takes a risk that her human body might not survive...and learns the secrets of her mysterious condition in the process.
REVIEW:
To start, I'll admit that the reason I was so drawn to this book was because of the incredible cover art. It just really stood out and grabbed my attention. There's just something kind of creepy about a sandglass filled with blood. (Very well done.)
As far as the book goes, Jennifer Lynn Barnes does a really good job of pulling you into this story. I found the beginning to be a little slow, but that lasted for about the lengh of the first chapter. Once things started moving "Every Other Day" is a book that you will NOT want to put down.
Kali D'Angelo is anything but your average teenager. She'd rather hang in the shadows and she has no problem with the fact that she has no friends. She actually prefers it that way and like most, if not all teenagers she has her secrets. One of which, is that every other day she has the need to hunt. Without giving to much away, (I dont like spoilers) this book is for those who like mystery, a bit of romance, suspence and characters who are so well put together you'll feel like Jennifer Lynn Barnes might be describing one of your friends, or someone you know. Every Other Day had some twists and turns that I wasn't expecting and that made the book all that much better. I like when a book keeps you on your toes and has you asking yourself what could possibly happen next. The ending has a horrible cliffhanger, and by horrible what I mean is that there HAS TO BE a second book. To me, that's horrible because I want THAT book NOW!! :)
I give this book 4 out of 5 hearts (only because of the beginning) and recommend it to absolutely EVERYONE. It's a great read. Jennifer Lynn Barnes definitely put alot of thought into this book and it shows. I'll be keeping an eye out for anymore books she might have on the way.
Great Job Jennifer!!