REVIEW: Voices of the Dead by Peter Leonard 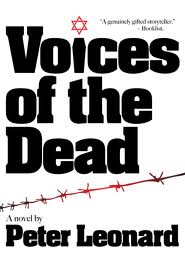 The year is 1971. The place is Detroit. Harry Levin, a scrap metal dealer and Holocaust survivor, has just learned that his daughter was killed in a car accident. Traveling to Washington, DC to claim the body, he learns that the accident was caused by a German diplomat who was driving drunk. This is only the beginning of the horror for Harry, though, as he discovers that the diplomat will never face charges – he has already been released and granted immunity. Enraged and aggrieved, Harry discovers the identity of his daughter’s killer, follows him to Munich, and hunts him down. What Harry finds out about the diplomat and his plans will explode his life and the lives of everyone around him.

Peter Leonard is a very skilled writer and in his book Voices of the Dead, it shows. I have to admit that at first, I found the writing style to be a little confusing, but as you progress you fall in stride right away.

Harry Levin's daughter is killed in a car accident, and when he finds out that the person who caused the accident is a drunk, German diplomat that won't face ANY charges for his crime, he decides it's time to take matters into his own hands. After a few close calls, and failed attempts to try and kill his daughters murderer I found myelf fighting to put the book down.

Voices of the Dead moves fairly quickly and evolves very well. Even though this is not the typical type of book that I read, I really enjoyed the way Peter Leonard gives us flash backs of Harry Levin’s life so that we learn what happened to his family, what he went through growing up, we learn a bit about his wife and of course, his daughter.