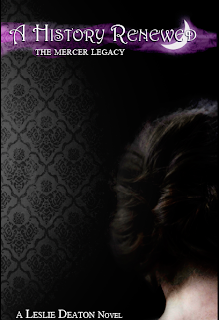 SUMMARY:
Lyla Mercer is back, and this time she not only has to face the consequences of her actions the night of the battle, but she must learn to do it alone. A History Renewed picks up right after A Marked Past.

After Lyla discovers the truth about her family’s dark past, she knows her life will never be the same. Her move to Salem revealed a history plagued with secrets and a future full of danger. Lyla is a witch, and the Mercers aren’t the only witches living in the small town. There are others, some allies, some enemies; and one unfathomably evil man who is hunting them all. Fearing their own extinction, the witches unite, ready to defend themselves, but when Lyla breaks the coven rules, she finds herself forced to face her hunter alone.
(As found on amazon.com)

REVIEW:
Well, what can I say about this book without giving away to much...? Let me start by saying that I enjoyed Leslie Deatons "A Marked Past", book one in the Mercer Legacy series, but she really outdid herself with book two. A History Renewed is amazing!! Leslie I'm so mad at you for leaving us with such a HORRIBLE cliffhanger!! (And by horrible I mean AMAZING) As I'm reading this book, I'm was constantly thinking, "what. is. going. ON!!" Leslie did a great job combining frustration, anger, sadness and the overall feeling of whats happening all in one book. As I reach the ending of the book, I wanted to scream because it was just unbelieveable to think it was over. I want book 3. NOW! Leslie, if book three is anywhere as good as A History Renewed, I'm going to cross my fingers for a book 4.

Oh, and for those who might be wondering if I'd recommend this book to a friend, the answer is simple. I would recommend it to everyone! Its definitely 4.5 stars for me!!
Posted by Unknown at 10:01 PM