REVIEW: Happy Birthday to YOU by Brian Rowe 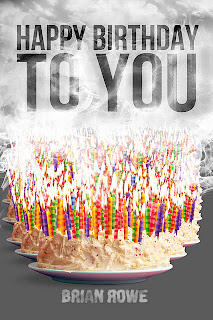 Newlyweds Cameron and Liesel Martin aren't able to celebrate their wedding bliss for long. Not only is Liesel unexpectedly pregnant... they're also facing the end of humanity!Liesel's evil witch sister Hannah has cast a spell to make all humans on Earth age a whole year with every day. It's up to Cameron and Liesel to stop her... and save the world! Who will survive? And who will perish?

Ok! This book was so incredibly amazing, I'm not sure where I should even begin. Happy Birthday To Me I enjoyed, Happy Birthday To Me Again had a terrible cliffhanger (and by terrible I mean that it was almost a "cruel and unusual punishment" to have to wait so long for book 3 to come out...Yes it was that good) and finally, Happy Birthday To YOU was in short, nothing of what you would have expected, and everything you wanted. Brian Rowe was so unbelieveably creative with this final book. Once again Brian Rowe creates this entire world with an abundance of detail and draws you in so deeply that for a second, I forgot all about my surroundings and felt completely sucked into the world he painted.

We start off were book 2 finished, and from the very beginning the action developes fairly quick:

1. Cameron and Liesel are married, and she gets pregnant almost immediately.

2. Liesel's diabolical sister Hanna is out for revenge against EVERYONE by casting a spell that makes the entire world age.

3. Cameron finds out more secrets Liesel had been hiding from him and also learns of things about himself that he didn't know.

In Happy Birthday To YOU, you run into some of the characters from the other books, and while some encounters are brief, others you read about again later. Each and everyone of those characters are very important to this book no matter how short and brief their moment may have been. There were numerous surprises in this book, many of which literally made my jaw drop in shock, and as for the ending?? As readers, we tend to think of how books will end while we're still reading. I do this all the time. Sometimes you guess right, other times you were close, and on rare occasions you are completely wrong. For me, I was 100% WRONG! I had imagined hundreds of ending and never expected what I got. Obviously I'm not going to say what it is, but I will tell you that I cried. Yes, that's right, I CRIED!!

I have a couple of series or trilogies that I can say are my favorite, but Brian Rowe's Happy Birthday trilogy is definitely top 3. (I'm not saying which of the 3 he is, if you want to know for yourself, READ THIS TRILOGY!)

5 of 5 Hearts. I dont even have to think twice about it. Brian Rowe, you did an amazing job with the series.

I will definitely be looking out for any more books he might have coming out next.
Posted by Unknown at 12:06 PM