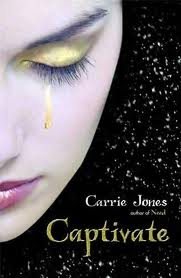 SUMMARY:
He smiles. It's a wicked smile. Kind but not kind. Handsome but dangerous. Feral almost. I can see why Nick nearly killed him. Nick... I ask again, "Why were you in the road?" "I was waiting for you."
Zara and her friends thought they'd solved the pixie problem. And they did - sort of. The pixies are all locked away, deep in the woods. But the king's needs grow stronger each day that he is in captivity, while his control over his people weakens. And it's enough to draw a new king into town. Astley claims he is different. He claims there are pixies who can live peacefully with humans, that it doesn't have to be all violence and nastiness all the time. Zara wants to believe him... until Astley also claims that she is fated to be his queen.

There is no way Zara would ever turn pixie. And she's got good friends who will make sure of that. Besides, she and Nick are so in love they're practically inseperable. But when the very thing Zara wants to protect most is exactly what's at risk, she is forced to make choices she never imagined...

"If you grabbed Stephen King and Stephenie Meyer and asked them to co-author a book, they would come up with Need." - Justine magazine

"Fans will enjoy the sizzle between Nick and Zara as well as the paranormal cast." - PW

This is a perect example where the second book in a series surpasses the first. The series starts off by preparing you to meet pixies and that you need to stay away from them because of their manipulation and bloodlust. But Captivate cleverly clouds all of that when you meet Astley, a new pixie who claims that not all pixies are violent and uncontrollable as those Zara has previously faced.

There are also new threats as well as tragic consequences. And while the plot takes some dark turns, Carrie Jones give the emotional journey a huge pay-off by the time you finish the book.

In Captivate, Zara deals with the consequences of her choices, and come to terms with the fact that ideals are never as black and white as we'd like them to be in the harsh light of reality. Her actions, (and reaction) to newcomer Astley create a crisis that challenges the attitudes of her friends towards pixies.

With everthing you learn about pixies, I found the action more intense, the stakes are MUCH higher and the conflicts are way more interesting and complicated. By the way Captivate ends, you know there’s way more to come.