REVIEW: Happy Birthday to Me by Brian Rowe 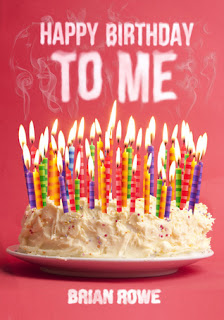 
SUMMARY:
Seventeen-year-old Cameron Martin has a huge problem: he’s aging a whole year of his life with each passing day. High school is hard enough; imagine rapidly aging from seventeen to seventy in a matter of weeks, with no logical explanation, and with prom, graduation, and the state championship basketball game on the horizon. That’s what happens to Cameron, a mischievous pretty boy who has never had to face a day looking anything but perfect. It starts with a slowing metabolism, followed by gray hair, wrinkles, and heart palpitations. Within days his girlfriend dumps him, his plastic surgeon father forces him to get a facelift, and his terrifying high school librarian seduces him to have sex with her. All he wants to do is go back to normal, but no one, not even the best doctors, can diagnose his condition. When he finds love with a young woman who may or may not be an all-powerful witch, he realizes that the only hope for his survival might be with the one person who instigated his condition in the first place...

Happy Birthday to Me, is simply amazing. Cameron Martin is your typical, "Girls want him, Guys want to be him" type of guy. He's good looking, has a great body, and a sexy girlfriend. But when he starts taking people for granted thinking that he will never see the consequences of his actions, THINGS GO WRONG!! After celebrating one to many fake birthdays just for the yummy chocolate cake, and treating a waitress a bit bad, he's cursed! When he wakes up the next day, he feels facial stuble thats never been there before, then his well toned body is starting to get flabby and for some strange reason that he can't explain, it looks like he's getting older.
Cameron has to try to figure out what's wrong with himself before time runs out. In that time, he's sees his girlfriend for who she really is, and also finds out who his friends really are. He learns to appreciate the things he has, as well as life in and of itself.
For those who have seen the movies Seventeen Again and The Curious Case of Benjamin Button, I'd say that this book is the perfect combination of both. Rowe brings many different emotions to this book, it's funny, sad, heartbreaking and most of all heartwarming.
Would I recommend this book to anyone?? I already have.
As far as rating goes:
5 out of 5 hearts!! Loved!!
Posted by Unknown at 3:44 PM