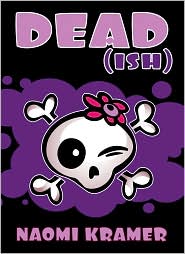 Title: Dead (ish)
Author: Naomi Kramer
Kindle Edition
SUMMARY:
Linda's had a bad day. First her boyfriend killed her. Then she woke up, still on this boring plane of existence, and with an odd obsession about her missing body. Mike won't tell her what he did with her body, and she can't find the stupid thing herself. There's only one thing she can do - torment the bastard until he coughs up the information.
REVIEW:
This was a free kindle download I found, and since I though the cover was interesting, I decided to read it.
This is a VERY short novella that at first kindda confused me. But once things started to move along, I fell in step right away. Dead (ish) is about a woman, Linda, who was murdered by her boyfriend and is completely irritated because not only is she still "here," but she cant find her body in order to "cross over."  So... She decides that until her ex decides to tell her where her body is, OR what he did with it, she is going to spend as much of her time as possible driving him crazy.
Since this is such a short read, everything comes together quite quickly. The characters aren't very well put together even though Kramer does give you enough information about them to be able to come up with a pretty good picture of everyone. I liked the story line even though I wish it would have been a little longer. The only thing I didn't like to much was the frequent use of foul language. Dead (ish) made me LOL in a couple parts, one of which was a reference she used with Smurfs. (I'm smiling just thinking about it...) Is this a book I'd recommend?? Yeah. Will I read the next 2 books?? Yup. Happy Reading.
RATING:
3 out of 5 hearts.
Posted by Unknown at 10:42 PM