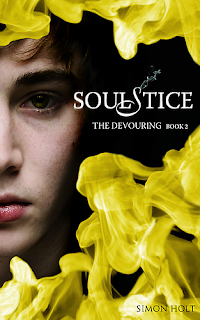 Title: Soulstice
Author: Simon Holt
Publisher: Little Brown
Pages: 272
SUMMARY:
The Vours: Evil, demonic beings that inhabit human bodies on Sorry Night, the darkest hours of the winter soulstice.
Six months...
Since Reggie first discovered the existence of the Vours in a tattered journal. Since her little brother, Henry, began to mutilate animals and turn against her. Since she learned to overcome her fear and destroyed a Vour  to save Henry.
Now as the summer solstice approaches, the Vours still haunt Reggie, but only in her dreams – until one night, when an unexpected visitor turns her nightmares into reality.
PRAISE:
"Terrifying, nail biting, and grossly intriguing, Soulstice, book 2 in the Devouring series, will haunt you until the very end."
REVIEW:
It's been six months since Reggie, and her best friend Aaron, rid Henry (Reggie's brother) of the Vour that possessed him. But now that the summer solstice is fast approaching, the Vours are starting to reign terror on them once again.

Then, Reggie is visited by the one, most unexpected, unbelieveable person, who helps reveal just how deeply infiltrated the Vours are in Reggie's life. That person also helps her realize that her strange powers have put her in more danger than she really knows.

Soulstice, just like The Devouring has a thick air of danger and suspense that is unsettling and engrossing. In this book, you'll learn more about Vours and further scare readers as she and Aaron discover that one person after another is somehow involved with the Vours. She also explores fearscapes alittle more, and they're definitely imaginative, very creepy, and often a bit gory.
Soulstice has a real creep factor feeling to it, even thought it might not be as creepy as the first book was. The characters are developed a little better and the stakes are much higher this time around. The unexpected ending will leave you exclaiming with injustice and so much frustration you'll want to scream. This book was better then the first, and if the last book is anything like the first 2... This will definitely be a series you'd love to see made into a movie. I'm completely head over heels with these two books, and as soon as a start and finish book 3, I'll have my review for you all.