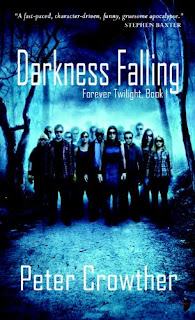 SUMMARY:
First, the flash. A glare of light, just before dawn, followed by utter darkness. A vast blanketing nothingness that covered the whole Earth.
Then, the disappearances. Friends and strangers alike, swallowed by the darkness… and then returned, altered, changed.  For the people of Jesman's Bend, it feels like the end of the world. But this is only the very start.

"To be read and shared and loved." - Joe Hill

"[The novel] very intelligently and deftly invokes a host of cinematic spookshows from Invasion of the Body Snatchers onwards." - Asimov's

"A riveting read." - The Guardian (on Forever Twilight: Darkness, Darkness)

(as found on amazon.com)

Darkness Falling is the first book in the Forever Twilight series by Peter Crowther. Don't get confused because of the title this ISN'T a romantic vampire book. When I read the summary I was expecting something abit scarier than what I recieved.

The book starts out interesting even though for a second, I found it alittle confusing. There's a flash of light thats almost blinding and just about everyone disappears. Three people on a packed flight leaving Denver are gone. Landing the plane was exciting through the first part of the novel. Once that was over, I found the story to drag a little, til we get close to the end of the book. There are some exciting moments and some of the "monsters" show up. Alot of the action at the end was for me, just a prelude to whats to come.