REVIEW: Happy Birthday To Me Again by Brian Rowe 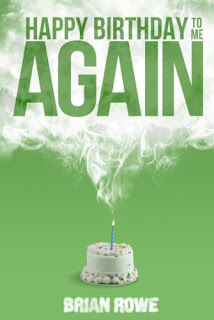 Cameron Martin has a huge problem: he’s aging a whole year of his life with each passing day… again. And this time... he's going backward!

When Cameron proposes to his beloved witch of a girlfriend Liesel, he thinks life can’t get any better. But when he reluctantly breaks off the engagement just days before the wedding, Liesel angrily unleashes another curse on the unlucky guy, this time making him age backward, from eighteen, all the way to zero.

Making matters worse, Liesel mysteriously disappears, leaving Cameron with no options, except watching himself rapidly shrink into a helpless child. Will Liesel be able to save his life again? Or will Cameron ultimately fall prey to his girlfriend's wicked spell?

Ok, lets get right to it.

I usually don't care to much for some sequels just because when I find the first book in a series to be excelent (as in this case) the sequels tends to fall short and disappoint me. Happy Birthday To Me, was amazing. I really enjoyed it, SO..... Happy Birthday To Me Again, had some pretty big shoes to fill. I must admit, Brain Rowe most definitely delivered an excelent sequel.

After breaking off his engagement to his girlfriend Liesel, Cameron Martin is faced yet AGAIN with an aging problem, except this time he's aging backward. Not only is he aging backward, but the one person that could save him again is nowhere to be found. This has to be really frustrating since in Happy Birthday To Me, he knew what was happening to him, but didn't know who could help him. And in Happy Birthday To Me Again, he knows whats happening to him, he knows who could help him, and she disappears....

Rowe once again does an amazing job with the storyline of this book. Each character has been described with so much detail, its very easy to picture every one of them with ease. The book itself starts by giving the readers a taste of the ending first, giving readers just enough detail to want to continue reading. He does the same in book one which I honestly found to be very smart. Now, I must admit that I was pretty sure I knew who the "bad guy" was, and I wasn't wrong. What I wasn't expecting though, was the unexpected twist that he added that has to do with a main character and the "bad guy." (Very well done Mr. Rowe...)

I found this book to be an excelent read, and I'm more then looking forward to reading Happy Birthday To You. It's the final book in the series and I cant wait til it comes out next year.


4 out of 5 hearts, only because the book ends leaving you wanting more. I literally had my mouth open when it ended!
Posted by Unknown at 1:09 PM