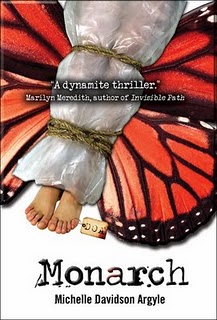 Nick's life as a CIA spy should be fulfilling, but it has only given him unhappiness, a wife who committed suicide, and two daughters who resent everything he has become. Now, stuck in the Amazon on the last mission of his career, he must track down Matheus Ferreira, a drug lord and terrorist the United States has tried to bring down for years. If he succeeds, he'll have the chance to start his life over again. Just when he's on the brink of catching Ferreira, he's framed for a murder that turns his world upside down. His only chance of survival lies in West Virginia, where Lilian Love, a woman from his past, owns the secluded Monarch Inn. He's safe, but not for long.

"Lies, secrets, and betrayals cocoon a love story as fragile as a butterfly's wings. Readers who like their thrillers spiced with romance, or their romance spiked with danger, will love Michelle Davidson Argyle's Monarch. A promising debut!" ~ Karen Dionne, internationally published author of Freezing Point and Boiling Point"Monarch is a smart, modern thriller that is surprisingly emotional, with well defined characters and a suspenseful plot. Readers will flutter with anticipation at the end of each chapter. Michelle Davidson Argyle is a solid storyteller." ~ Cheryl Kaye Tardif, bestselling author of Children of the Fog"Monarch, a dynamite thriller, has all the ingredients necessary to keep thriller lovers turning the pages. With characters you'll love and love to hate, a twisting plot with plenty of action, crisp dialogue, and for a touch of the unusual, the Monarch butterfly flutters through this exciting tale." ~ Marilyn Meredith, Invisible Path

(As posted on Amazon.com)

Michelle Davidson Argyle has done it again!! I had read her book Cinders, and found it to be a very good read. But Monarch..!!! WOW! This is the type of book that you could actually see being made into a movie. There's action, adventure, mystery, romance, good relationships, and horrible ones as well. I would love to tell you that I had a favorite character, but I don't... The reason for that, is because I can honestly say that I could feel the love, anger, confusion, resentment and everything else with just about every character in this book. Michelle did a fantastic job of putting together each character.
Michelle also did a phenomenal job of interlacing the storyline itself with many facts dealing with the monarch butterfly. (Tattoos, bloodspatter, etc.)

I would have liked to have known alittle more about Violet, but I just think that that's because she stood out alittle more to me on a more personal level.
This is a book I would recommend to ANYONE. I had a really hard time putting it down. I rate this book at a definite 5 of 5 hearts.

Michelle, please keep up the good work. I can't wait for your next book to come out!! (EXCITED)