REVIEW: The Devouring by Simon Holt 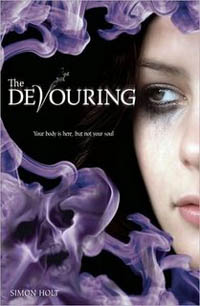 SUMMARY:
"When dark creeps in and eats the light,
Bury your fears on Sorry Night.
For in the winter's blackest hours,
Comes the feasting of the Vours,
No one can see it, the life they stole,
Your body's here but not your soul..."

THE VOURS: Evil, demonic beings that inhabit human bodies on Sorry Night, the darkest hours of the winter solstice.
When Reggie reads about the Vours in a mysterious old journal, she assumes they are just the musings of an anonymous lunatic. But when her little brother, Henry, begins to act strangely, it's clear that these creatures exist beyond a madwoman's imagination, and Reggie finds out what happens when fears come to life.
To save the people she loves, Reggie must learn to survive in a world of nightmares. Can she devour her own fears before they devour her?
The Devouring is an engrossing tale of terror that will have you wondering: what if your worst fears became your living nightmare?

Comparable to books by R. L. Stine and Stephen King, The Devouring will keep readers on the edge of their seats. Reggie is a horror fanatic. When she finds a journal in a box of used books at the bookstore where she works, she "borrows" it. It tells of the Vours, black smokelike beings that possess humans who can't conquer their fear on Sorry Night (the eve of the winter solstice). Reggie and her friend Aaron attempt to make the Vours materialize but instead they possess her little brother. In a fight to the death, Reggie joins the battle of humanity against the Vours. This story contains classic elements of the genre: a horrific monster, fusion (where two different entities are fused into one), and the process of discovery. The book has some graphic content, blood, and gore, which only add to the chills. A must-have for horror fans.
-School Library Journal                                     (as found on Amazon.com)

This book drew me in just by reading the first bit of its summary.

"When dark creeps in and eats the light,
Bury your fears on Sorry Night.
For in the winter's blackest hours,
Comes the feasting of the Vours,
No one can see it, the life they stole,
Your body's here but not your soul..."

That tiny part alone sounded SO CREEPY, that I just NEEDED to read it and find out for myself if it's as good as it seems.

Reggie Halloway is the type of girl who just loves anything scary. Just to be clear, she's a horror fan. It could be anything ranging from movies to books, scary stories anything. While she's at the bookstore were she works one day, she runs into an old journal that grabs her attention immediately. After she decides to "borrow" the book and takes it home with her, she begans to read what appear to be the ranttings of a mad woman. Soon after, things start getting weird. She starts having nightmares, Henry's (her brother) pet goes missing and he himself is acting a bit odd. Once she realizes whats happening to him, Reggie and her friend Aaron will do anything and everything possible to try and save him.

This is the type of book that will keep you on the edge of your seat, it'll keep you up at night, it'll scare you (at least it scared me..), and it'll have you turning the page until your finished. I found myself unable to put this book down! I would even take it with me to work and read it whenever I wasn't with a client. Simon Holt did a great job with the storyline of this book. I'm lucky enough to have the following 2 books in the series so I don't have to worry about having to wait to read them (YAY for me!!). I give this book 5 out of 5 hearts. I've got my fingers crossed that book 2 will be as good. I definitely plan on keeping my eyes open for any other books Simon Holt might have out or that are in process.
Posted by Unknown at 8:14 PM