GUEST POST & REVIEW: A Marked Past by Leslie Deaton

I'm SO excited to have my very first guest post be hosted the very talented Leslie Deaton! I hope you enjoy this as much as I do!
Sarita

(Leslie, once again, thank you so much for taking some time out of your busy schedule and hosting such a great guest post)

Creating Characters
When I started writing A Marked Past, I knew I wanted to write a young adult novel about a young girl living in Salem Massachusetts; but I wasn’t sure who would actually tell my story. Who would walk through the streets of Salem? Who would possess the magic that my storyline needed?


My main character’s physical attributes came from old photos of my grandmother as a young girl. Her dark hair, fair skin, and bright blue eyes inspired me to create a character with the same features. Her name however, came from the last place you might expect, from team members at my day job. I was working as a corporate consultant, and while chatting with a coworker I heard the name Lyla. It’s what he wants to name his first daughter, “It means night,” he said. My mind began to wander, a name meaning night, it was the perfect name for a young witch. The family name Mercer also came from a coworker; it’s Melissa’s last name at the office.


Next I had to create a series of characters that matched the history and ethnicity of the families in town. Most of them are Irish so I made a list of names I liked and looked up the meanings. But some of the names carried a bit more weight with me, and so I delved into researching the origins and meanings of certain character’s names.

Hana is one that I took the most care with besides Lyla. She has a brooding spirit, quiet intelligence, and an undying dedication to her family, so she needed a substantial name. Mohana is the one I picked for her; it means bewitching, and shortened to Hana it’s still modern enough for current day readers.


Next came Hana’s older sister, Sage. She has experienced tremendous loss, must learn to overcome their differences and is ultimately responsible for to fighting to save her family. Her name may seem cliché, but she holds the family’s wisdom, is gentle, and kind. These characters may not be real, but I hope that they come to life on the pages of my book. And I hope that I chose well when searching for their names. Some of the characters are named after people that I love (Leah) some are variations of cats that intrigue me (Henry), and some were just born on the pages of A Marked Past (Birdie).


For all the writers out there, chose your character’s names based on a feeling. It may sound normal to you (Veranda) but no one else, but if it works, then keep it. After all, I was completely obsessed with Hermione for years and I’d never heard of her name before picking up Harry Potter. 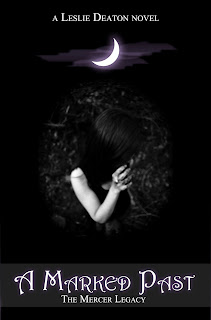 SUMMARY:
Lyla Mercer’s life changed the moment her dad was murdered, and again when she heard that she could be next. Forced to move to Salem for safe keeping, Lyla soon discovers her family has a dark history in the small town, and when a glossy black moon appears on the back of her neck she becomes the newest part of that legacy. Her family is marked and being hunted, but Lyla may be just the weapon they need to survive. Lyla attempts to ignore the danger, pretending to be normal, but whispers and rumors follow her everywhere. She thinks nothing can ever be normal for her again until she meets Caleb, the minister’s son, and the absolute wrong boy to be dating a witch. He’s everything she wants to be, just a normal kid from a normal family. At least that’s what she thinks, but nothing is as it seems in Salem. Caleb has secrets that rival her own. Until recently, her father's murderer has managed to keep his true identity a secret, but when Lyla uncovers the truth about him, nobody is safe, especially her.

REVIEW:
This is an excellent book.

Lyla Mercer is your typical teenager who loves her boyfriend, hangs out with her best friend and is considered popular. But everything changes when her father is killed in a hit and run, and her mother is so devistated by his death, that she decides they should move from Chicago to Salem. Just like any teenager, Lyla HATES the fact that she has to leave her bestfriend, her boyfriend, and everything she knows and loves.

Once in Salem, she finds it fairly easy to make new friends and even find out that she has family that she had never met or even knew existed.

Then she receives a mark on the back of her neck and along with it, abilities that she would have thought were impossible. But along with her new abilities, she learns that her family has many secrets that need to be kept a secret. Why? Because Lyla learns that her father didn't just die, but that he was murdered, and what could be worse than that? Learning that she, and her entire family could be next on the killers list.

In this book, you find that the "good guys" might be bad, the "bad guy" isn't just bad, he's evil, and Lyla's new boyfriend Caleb just might be caught somewhere in the middle.

I found myself up at all hours of the day unable to put down this book. Leslie Deaton did an amazing job of finding the perfect combination of romance, mystery, nostalgia, and of course, the paranormal. I can't wait to read book to in this series since A Marked Past finishes very well with a nice cliffhanger.

5 of 5 hearts. This book does have it's gramatical errors, but nothing you cant overlook. The book itself is excellent. I'll be looking forward to book 2 in the series and any other books Leslie might have on the way as well. Great Job Leslie!