REVIEW: For the Birds by Aaron Paul Lazar 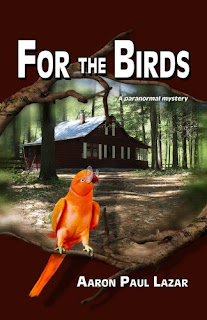 
No one could accuse Marcella Hollister's family of being normal. Her gorgeous Native American husband, Quinn, has a compulsive cleaning problem – which works for her, since she gets a pass on housework. Her mother, who insists on being called Thelma, loves picking on Quinn. And then there's Ruby. Sometimes Marcella isn't sure who Quinn loves more, his wife or his prized parakeet.

At the Adirondack National Bird Show, Thelma trips and falls into a pool with Ruby. Although both survive the ordeal, a bizarre link forms between them. When Thelma’s kidnapped from her hospital bed by a recently released felon, the FBI shows up asking questions about Thelma’s inheritance. Could it be linked to the biggest unsolved bank heist in history?

Across the rugged Adirondack park landscape, a brutal scenario evolves, where the good guys aren’t what they seem, and only Ruby’s newly acquired “Thelma-vision” provides slim hope for survival.

For the Birds, is a really nice read that you might enjoy on those days that you just want to sit back with a nice cup of coffee or hot chocolate and do nothing. Its a warm read that I found to be very enjoyable.

Marcella Hollister, along with her husband and mother (who only wants to be called Thelma) and of course their parakeet Ruby are staying at a very high end hotel where Ruby will be entered in a competition. But after Thelma and Ruby have a near death experience, in which luckily no one is hurt, both seem to have some sort of connection to the other.

After a series of mysterious events:

The FBI is now envolved in trying to solve the case. Marcella seems to have her doubts about one of the agents and as a result decides that she and Quinn will have better chances of finding her mom on their own.

Even though I enjoyed reading For the Birds, I felt that their were parts of the story that dragged in certain areas and more so at the ending. Altogether, I still enjoyed the book alot.